I’ve been seeing a sentiment floating around a lot lately and it’s starting to get under my skin: mental illness is a health problem for young people. This isn’t strictly untrue: suicide is the second leading cause of death for 10-24 year olds. There are some studies that indicate depression rates are increasing in young adults. The problem is less about truth and more about scope: it’s easy to imagine that depression, anxiety, and other common mental health problems are things that many people deal with in young adulthood, but that we outgrow.

How often do you hear people discuss mental health in regards to adults over the age of 30? I honestly can’t remember the last time I’ve heard one. It’s a young person’s problem in our collective consciousness. Perhaps even more acute in my mind is that even when we do talk about mental illness in adults, we talk about it as if they were still young. What does that mean? It means that many people don’t understand that if someone has had mental illness for their whole life, their relationship with it changes. Even if they still struggle, they learn new tools and gain understanding. It’s not the same as the first wave of depression that knocks you on your ass and leaves you wondering how you’ll ever stand again. 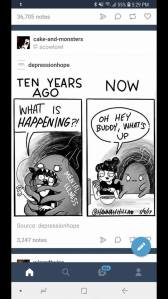 I don’t want to downplay how serious longterm mental illness can be, because I have lived with it for my entire adult life and boy howdy is it balls, but when you’re reaching year 10 or 20, the flavor is completely different and the support that you need is completely different. Most often when we hear about mental illness we hear about people who are flailing and helpless, people who act out through negative behaviors. We hear about attention seeking behavior, or sometimes manipulation. We often hear about people who don’t necessarily want to accept help or who don’t know what is helpful.

The image that many of us have is someone who lies around looking waifish and staring out windows mournfully. In some people’s minds you can SEE depression, like that silly black cloud that follows people around in antidepressant commercials. But it’s something your’e ashamed of that you hide because it’s embarrassing and you don’t understand it.

On the flip side, we often get much better at masking as we age. We’ve had to function with mental illness for long enough that we know how to keep going to our jobs and leaving the house even when we feel like death on the inside. And sometimes, if we’re lucky, we’ve got some skills and strategies that we know to pull out when things get bad.

Perhaps most important, most of us become more self aware. I’ve seen a lot of 17 year olds post things they thought were semi-subtle social media posts indicating that they were suicidal. Looking back, there’s nothing subtle about them. Now most of the people my age either don’t post melodramatic statuses or they’re very matter of fact about it and include notes on how others could help or what they’re doing. It doesn’t feel nearly as romantic or interesting anymore. It’s about as exciting as sharing that you need someone to help you move (and just as enticing to all your friends).

The experience of living with mental illness over time doesn’t mean that you will always be better at dealing with it. But it does mean you understand it better, you feel more comfortable with it, and you’ve probably got more ideas of things to try to feel better. I would love to see more representation of the person who has grown comfortably into a mentally ill adult, who can make jokes about the fact that they immediately think they’re going to be fired if their boss goes into a closed door meeting (yes this is me), who has lists of people to call and skills to use, and who still is mentally ill. It’s completely different, but an experience that many people grow into over time.

I’d love to have more understanding that the blase attitude many of us have about our mental illness comes from living with it day in, day out, for years and years. It gets boring after a while. I am bored with being mentally ill. That is what it means to grow up with it.